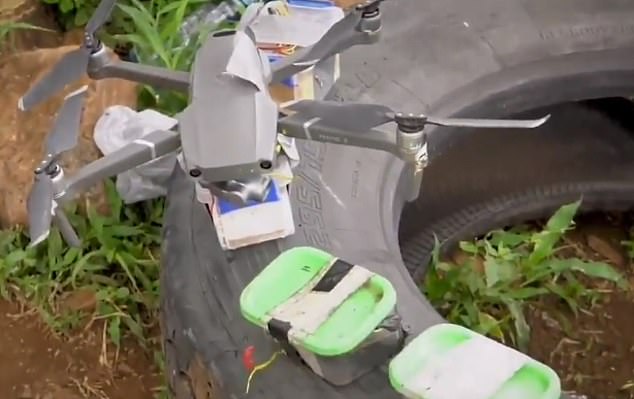 Mexico's fastest growing cartel has allegedly deployed drones packed with C4 explosives as it battles against armed residents for control over a city.For over a year now, the Jalisco New Generation Cartel has attempted to exert its influence on the western city of Tepalcatepec. However, a group of armed residents say they have withstood the attacks and are fighting back despite countless deaths and injuries on both sides.

Now the residents say the Jalisco New Generation Cartel, which also has a presence across several cities in the United States, have turned to equipping drones with explosives as part of their menacing strategy.

In interviews with Mexican outlets Noticieros Televisa and La Silla Rota, armed men who form part of Tepalcatepec's auto-defense group showed off some of the homemade bombs they have discovered.

'This is the C4 bomb detonator that were on the drones that the Jalisco New Generation Cartel sent to attack our town,' one of the armed men said.

The explosives were were attached to two drones that the men say were recovered following a confrontation with the cartel in July.

The cartel allegedly used C4 explosives, commonly used by the military and terrorist organizations, that was stuffed inside small plastic containers, along with pellets and shrapnel to maximize damage.

A wire dangled out of each taped plastic bowl and was connected to a detonator attached under the drones.

In an interview with La Silla Rota, one of the villagers recalled how in the last war-like battle, the cartel also employed .50 caliber sniper rifles and grenades to attack Tepalcatepec.

The city has a population of some 35,000 people that borders the state of Jalisco, the cartel's home base.

The cartel is led by Nemesio 'El Mencho' Oseguera. The United States has offered a $10 million reward for information leading to his arrest.

'In that moment I started saying my prayer and I said it is the opportunity to show that we are taking care of our town, that they are not going to harm any families,' the man said. 'We experience terrorist moments and bullets come from everywhere.'

It is not the first time the cartel has been accused of using explosives packed into drones.

According to the Mexico Attorney General's Office, the Jalisco New Generation Cartel set off explosions using drones during series of attacks that were carried out earlier this year in the states of Puebla and Guanajuato.