Mexico, a crime battlefield with at least 10 cartels at war 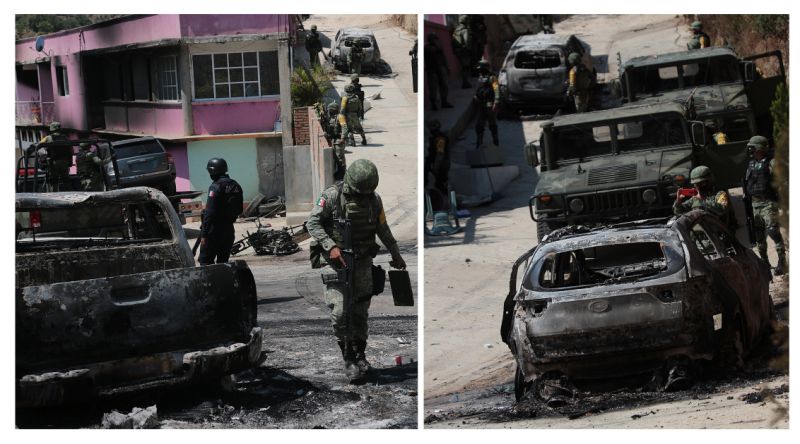 Mexico, Aug 10 (EFE) .- With the capture of José Yépez Ortiz "el Marro", leader of the powerful Santa Rosa de Lima Cartel, the Government of Andrés Manuel López Obrador gave its biggest blow to drug trafficking, although the drug cartels they continue to sow violence throughout Mexico.

There are at least a dozen Mexican cartels, with networks expanding to the United States, Central America, South America, and Europe, and about thirty criminal cards dedicated to drug trafficking, kidnapping, and extortion.

The clashes between these organizations have generated a spiral of violence in the last decade in Mexico, which in 2019 broke its record for homicides.

These are the most important organizations in the country according to reports from the Attorney General's Office (FGR), the Drug Control Administration (DEA) of the United States, and academic and journalistic investigations consulted by Efe:

- CARTEL DE SINALOA: Also known as the Pacific Cartel and founded in 1989, it is one of the oldest in Mexico, considered the largest and the one with the largest presence in the United States.

Concentrated in the Mexican Pacific, it controls the so-called Golden Triangle (Sinaloa, Chihuahua and Durango), a region with a high concentration of marijuana and poppy plantations, and has a presence in Baja California and Baja California Sur.

It is believed that after the arrest of Joaquín "el Chapo" Guzmán, who was considered the most powerful drug trafficker in the world and sentenced last year to life imprisonment in the United States, the organization came under the control of Ismael Zambada "el Mayo" , historical leader of the cartel.

Last year the Sinaloa Cartel besieged the city of Culiacán in response to the capture of Ovidio Guzmán, Chapo's son, forcing the Army to release him.

- NEW GENERATION JALISCO POSTER: Former armed wing of the Sinaloa Cartel to fight the Zetas, became independent from the parent organization and began operating in 2011 under the leadership of Nemesio Oseguera Cervantes "el Mencho", one of the most wanted criminals in Mexico and the United States.

It is the cartel with the fastest growth, expansion and one of the most violent within Mexico.

Headquartered in the city of Guadalajara, it operates in at least 24 of the 32 states of the country, with a special presence in Jalisco, Nayarit, Baja California (where it allied and absorbed the Tijuana Cartel, historical rival of the Sinaloa Cartel), Colima , Michoacán, Guanajuato, Guerrero, Querétaro, Morelos, Veracruz, State of Mexico, Mexico City and Puebla.

It manufactures and distributes large quantities of methamphetamine, cocaine, heroin, and fentanyl to Los Angeles, New York, Chicago, and Atlanta.

According to the DEA, the rapid growth of this organization with a paramilitary structure is due to its "willingness to confront violently with the security forces of the Mexican government and rival cartels."

He recently demonstrated his power with a failed attack against the Mexico City police chief in which three people died and reflected his presence in the country's capital.

-SANTA ROSA DE LIMA: With a strong presence in the central state of Guanajuato, the Santa Rosa de Lima Cartel has been characterized by drug trafficking, kidnappings, extortion and, above all, the theft of fuel from the pipelines of the state oil company Pemex.

Its leader, El Marro, has been one of the main objectives of the López Obrador government, which for months has encircled his collaborators and family members and finally managed to capture him earlier this month.

The brutal war that started in 2018 against the Jalisco Nueva Generación Cartel for control of the theft of hydrocarbons (known in Mexico as huachicol) has made Guanajuato the most violent state in the country.

- CARTEL DE LOS BELTRAN LEYVA: It was a split from the Sinaloa Cartel in 2008 led by the six Beltrán Leyva brothers. All were murdered or imprisoned, but from this they split several cards that continue to operate in states such as Guerrero, Morelos, the State of Mexico, Nayarit, Aguascalientes, Sinaloa and Sonora.

The two most prominent groups are Los Rojos and Guerreros Unidos, which are at odds over the heroin trade.

According to the official version of the Government of Enrique Peña Nieto (2012-2018), Guerreros Unidos would be behind the disappearance in 2014 in Iguala (Guerrero) of the 43 students from Ayotzinapa, whom he would have confused with members of Los Rojos.

- CARTEL DE JUAREZ: It lived its peak in the 1990s under the leadership of Amando Carrillo Fuentes, nicknamed El Señor de los Cielos for his fleet of aircraft to transport drugs.

It currently concentrates its presence in the northern state of Chihuahua, where in mid-2010 it waged a bloody war with the Sinaloa Cartel that triggered violence in the region, especially in Ciudad Juárez, on the border with El Paso (Texas).

Although his influence has greatly diminished, he traffics heroin and methamphetamine to El Paso, Denver, Chicago, and Oklahoma.

- CARTEL DEL GOLFO: Active since the 1980s, it had great influence in the north and east of the country, but was weakened by splits and currently focuses on the state of Tamaulipas and, according to some reports, has a presence in Quintana Roo, in the Mexican Caribbean.

According to the DEA, it traffics heroin and methamphetamine across the Texas border, with hundreds of distribution points in Houston and Detroit.

- LOS ZETAS AND EL CARTEL DEL NORESTE: Los Zetas were the military arm of the Gulf Cartel but they split from the organization, with which they waged a bloody war in 2010 for control of northeastern Mexico and managed to control much of the country. In 2016, they fractured giving rise to the Northeast Cartel.

"His influence has been significantly diminished by battles with cartels and security forces," according to the DEA.

The Northeast Cartel is based in the city of Nuevo Laredo (Tamaulipas) and has influence in Nuevo León, Coahuila and San Luis Potosí. It distributes drugs to the American cities of Laredo, Dallas and New Orleans.

- THE MICHOACAN FAMILY AND THE TEMPLAR KNIGHTS: Violence, religious postulates and regionalist ideology characterized La Familia Michoacana, which expelled the Zetas from Michoacán, in the center of the country, during the 2000s.

But the organization was weakened by the death of its leader, Nazario Moreno González "el Chayo" in 2014 and by the internal split of the Knights Templar, which has also been weakened by the arrest or death of their leaders.

Despite this, both organizations still have a presence in the center and south of the country: Michoacán, Guerrero, the State of Mexico and Morelos.

- UNION TEPITO AND ANTI-UNION TEPITO: They are two rival groups dedicated to drug trafficking and extortion in businesses in Mexico City, especially in the historic center. Together with the so-called Tláhuac cartel, they dispute the capital - which was traditionally considered without the presence of organized crime - and have links with other groups.