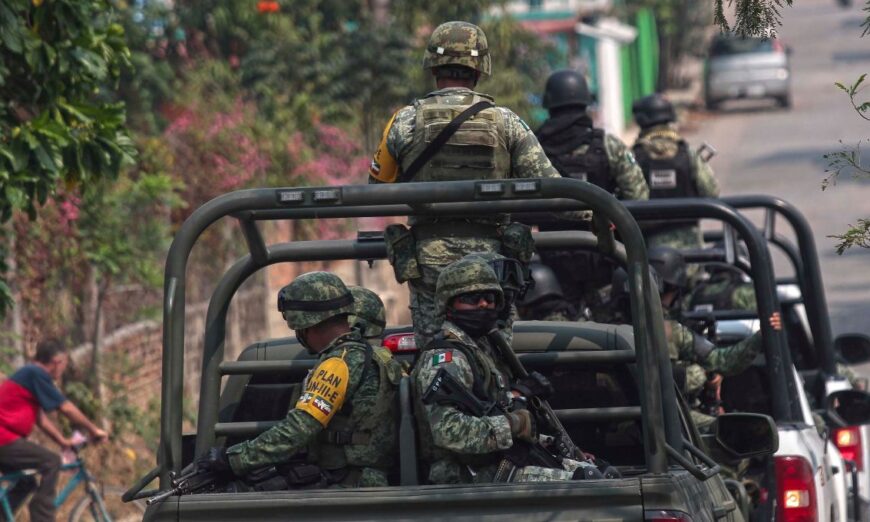 The profound militarization of public life in the country is in contradiction to a democratic policy of institutional strengthening of the Mexican civilian governments that were formed at the end of the revolutionary process of the last century.

Recent actions in the implementation of total control of the customs system and port activity are redefining areas that transcend the notable influence of the military sector, turning the generals and the admiralty into a political and economic factotum whose presidential control will be useless for any corrective action. in the immediate future.

The new political-military relationship ... with AMLO.

With the creation of the National Guard, the current government renewed simulation schemes in the new deal with the armed forces and their political use.

With tricky mechanisms in the legal norms (such as the fifth transitory article of the constitutional reform that militarized the control and formation of the new police force for the entire six-year term) and the discretionary margins of the new presidential authoritarianism (such as the decree of May 11, 2020 ), the definitions of the regime make and justify their own creations, according to the president's convenience: a police body that ends up being an extension of the armed forces where the civilian component is accessory.

Worse still, as in the case of formal subordination to a civil agency (Ministry of Security and Citizen Protection), its holder was reduced to a value of decorative paper or, at best, of "scapegoat", when the occasion warrants , in case of protecting the responsibility of military commanders in the event of failures or violations of human rights.

Now, with the alibi of corruption, under the scheme of an alleged civil government control, the administrative changes in the customs and port system are justified (the most recent, in the General Coordination of Ports and Merchant Marine, July 25). The civil authority is relegated, whose holders end up in a decorative role, independent of the profiles of efficiency or honesty whose presidential importance is only rhetorical and only attributable as a merit to the military.

The broad military presence in the social and political life of the country, now disguised as "general activities" (the "specific", as is already outlined in the military narrative, are those of defense), is not militarization because it says so! Secretary of Defense General! (Excelsior, July 6), despite the fact that reality shows otherwise.

Civilistic fracture. The current military tour de force is significant for its impact on the breakdown of the principle of civil supremacy that, in a singular way, was forged in the first decades after the revolution and consolidated towards the second half of the last century.

Mexican presidentialism did so under the authoritarian, clientelistic and political corruption premises of a system that separated generals and sailors from government positions and popular representation.

With the current militarist populism, there has been a shift from a pattern of military privileges and influences (of impunity and of an economic nature) to a scenario of military presence in the government that was typical of a context prior to its civilian domestication with the former PRI.

In the current six-year term, it is presumed the extension of 13 important civil activities in charge of the military (El Universal, July 25. See National Defense Sector Program, 2020-2024, Official Gazette, June 24).

In the particular case of the total control of the country's port administration, regardless of the fact that it is now about the missing economic reward to the high command of the Navy (after the obsequious treatment in budgetary and financial terms that this government has given to the Sedena), the militarization is evident by:

Presidential authoritarianism that, regardless of the legal and regulatory framework, imposes its decision above the laws

the extension of presence in government spaces under an alibi or pretext of security justified by the myth of military incorruptibility and efficiency; and

the deliberate ignorance or omission of the strategic importance of the accumulated experience and the added value of the Mexican merchant marine, superimposing the military interest on the technical and civil administrative efficiency.

Indeed, both for the military appropriation of customs and ports, at least nine laws should have been previously approved by the Congress of the Union. In addition, the first appointments of active admirals have already been made (July 25) in two integral port administrations, whose legality is in question and questions the civil superiority that, today, the president has buried.

These decisions are masked with prejudices about military efficiency and the myth of incorruptibility (El Universal, July 29), ignoring that there has been a military presence and responsibility in customs and ports, and that their performance is not alien to the chaotic and corrupt scenario. presented today (starting with security). Military and sailors are part of the problem, rather than the solution (see Raymundo Riva Palacio: “The military won (again)”, El Financiero, July 24; and, Ricardo Raphael de la Madrid, “Jiménez Espriú vs. López Obrador ”, El Universal, July 23).

Administratively, according to the agency's work reports in recent years, the management of seafarers did not have the same dynamism compared to civil officials of the merchant marine.

In the current scenario, the balance of this new militaristic phase is worrying, leading to the resignation of the head of the Ministry of Communications and Transportation (SCT). In fact, the reluctance of the SCT managed to postpone the legal reform, whose approval was imminent last December and which would formalize the military appropriation of the port system.

Without legal reform, the pandemic and US pressure, whose security agenda has been accompanied by the Secretary of the Navy for two six-year terms, ended up bending a president without strategic clarity.

"Operationality" (sic) and accountability. Using the Mexican military language and with the scheme of the current government with the National Guard, it is possible to see the characteristics and scope of military rule in the country.

Under a strict conceptual criterion, creating a paramilitary body for police tasks constitutes a paradigm that dilutes the responsibility for its bad performance derived from legal actions or omissions, as well as for serious human rights violations.

The legal duality of dependency of the National Guard oscillates between that formally defined by the Constitution and its law with respect to the Ministry of Security and Citizen Protection, but, as already noted, due to a powerful transitory article (as described by the head of la Sedena) the National Guard in its formation, training, logistics and operationally only depends on the Army.

But when it comes to assuming legal responsibilities, the Sedena evades, the General Command of the National Guard does the same and the SSC looks to the military. It is clear that it is the military establishment that should not be touched or questioned (see example of transparency of the GN, in UIA, Citizen Security Program: 2020, p. 27-35).

To a greater or lesser extent, and without less normative (and confusing) regulation such as the one observed by the National Guard, this mechanism of dilution in accountability is already reflected in customs and ports. The agencies that administer and legally manage them, Finance and Communications and Transportation, are being de facto displaced by the Sedena and the Navy, respectively, but without assuming the legal and less political costs of the eventual failures due to their operational and administrative decisions.

The extrapolation, by presidential auto-da-fe, that military discipline and obedience together with the perception of honesty are substitutes for the rule of law and a guarantee of government efficiency, is consolidating the country that Andrés Manuel López Obrador criticized about the inability of governments PRI and PAN members for relying on the military sector.

The recent presidential decisions, by creating stages of military impunity where Sedena and Semar are legally, administratively, budgetary and politically irresponsible, mean the fall of a principle of stability and governability, with serious consequences for all.