Four Security Personnel for PEMEX are Killed During Ambush in Queretaro 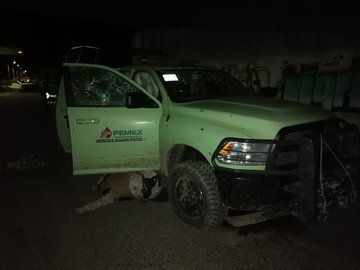 An ambush by an armed group apparently of huachicoleros , Physical Security personnel of the parastatal Petróleos Mexicanos ( Pemex ) in the municipality of San Juan del Río, in the state of Querétaro in Mexico , left four dead.

The company staff moved this on board a truck on the road between the towns of  Palmillas and Portezuelo , level of access to the community of Cazadero , as part of a tour of surveillance in Pemex pipelines.
According to the Mexican media, it was at that point that a group of subjects with large caliber weapons fired at them without mercy. Even on social networks, videos with audio circulated where you can hear the armed attack, which was recorded by residents of the area.

‍
It was announced that four people lost their lives and it is presumed that the aggressors fled aboard vehicles bound for the state of Hidalgo , so a strong police deployment was carried out on that road and in the Cazadero area to try to find the aggressors.

This is the second time that huachicoleros attack whoever stands in their way in that entity because on May 22, an element of the National Guard Special Forces Division was assassinated when he was in the vicinity of the site where a takes clandestine fuel .

On that occasion, the place where the crime was committed was in the Palmillas - Apaseo Macrolibramiento , a few steps away from the Tula-Toluca pipeline , where some subjects who were presumably guarding the area shot him and also stole the charge weapon that carried, all this while the elements that accompanied him were inspecting the place after noticing unusual movement.