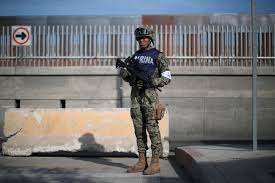 Officials say Mexican soldiers killed nine alleged gunmen along the border with Texas in the northeastern state of Tamaulipas.

The Mexico Attorney General’s office in Reynosa said the confrontation occurred Sunday morning in Miguel Aleman, across the Rio Grande from Roma, Texas. The office said its personnel observed the recovery of the bodies. The alleged aggressors were wearing military-like uniforms.

Soldiers came under fire from gunmen in the brush while on patrol, according to a spokesperson from Tamaulipas’ security coordinating group, who spoke on condition of anonymity.

It was not immediately clear which criminal group the gunmen belonged to. The area has been the scene of clashes between the Northeast cartel — a splinter of the Zetas — and the Jalisco New Generation cartel and the Gulf cartel, which has long controlled illicit traffic on that end of the border.