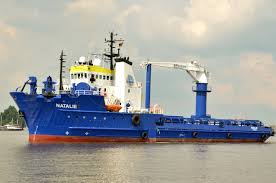 Under cover of darkness during the evening hours of July 23rd, a distress call was received over Channel 16 that the MV NATALIE was in the process of being boarded by pirates. One small craft was used to board the OSV, where 4-6 Pirates gained entry to the vessel. Early reports indicate that the suspects were armed. We have been told that the pirates stole some supplies from the vessel but were not told any specific yet. Prior to disembarking the vessel, the pirates robbed most of the crew members of personal belongings