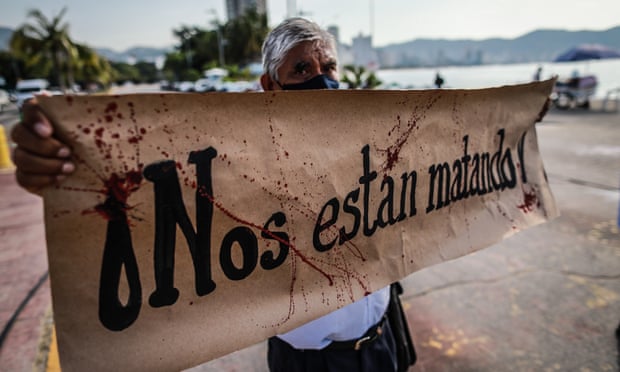 Early on Monday morning, Israel Vázquez, a crime reporter in the Mexican city of Salamanca, received a tip that a plastic bag full of human remains had been dumped at the side of a street.

He reached the scene before the police, but as he prepared to broadcast on Facebook live, gunmen opened fire from a passing car, and shot him eight times. He died of his injuries later in the day.

He was the third Mexican journalist to be murdered in less than two weeks – and the eighth this year.

Jesús Alfonso Piñuelas, founder of two media outlets in Sonora state, was shot dead on 2 November. Arturo Alba Medina, a TV host in Ciudad Juárez was shot on 29 October as he drove through the border city. Press reports say he was struck by 10 bullets.

The string of killings has cemented Mexico’s place as one of the world’s deadliest countries for members of the press, and underscored the risks facing journalists who cover sensitive subjects such as crime, politics and the security forces.

“You want to kill a journalist, you can do it without much of a chance that you’ll be caught,” said Jan-Albert Hootsen, Mexico representative of the press freedom group the Committee to Protect Journalists.

In at least five cases, the journalists’ murders were directly related to their work, Hootsen said. It remains unclear if Piñuelas and Alba’s deaths were linked to their journalism, but such cases are seldom investigated with any rigor, he said.

“There’s an ongoing crisis of violence and impunity. Since successive Mexican governments haven’t made any serious attempts to combat impunity, the situation has gotten steadily worse.”

In 2019, Mexico suffered the second highest number of killings after war-torn Syria, according to the Committee to Protect Journalists (CPJ).

Vázquez, 31, had only been a journalist for three years, but he was well-regarded by his colleagues at the digital news outlet El Salmantino. He covered sports as well as crime, and often took the night shift.

Like most Mexican reporters, he knew that his work involved a certain degree of self-censorship in the name of survival, said co-workers.

“He was a person who was very careful with his broadcasts,” said Verónica Espinosa, Guanajuato correspondent for the news weekly Proceso. “He didn’t give sensitive details” in his reports.

But such safety measures are not always enough. Víctor Manuel Jiménez, a reporter at Rotativo Digital Guanajuato – another local news outlet – left home on 1 November to attend a baseball game in the city of Celaya and never returned.

The official response to such crimes has often been half-hearted. When reporters in Salamanca demanded a meeting with the local mayor, Betty Hernández, after Vázquez’s murder, they were stunned when she appeared to blame him for his death.

“The truth is, look, going at six or five in the morning to cover a story in that place, which everyone knows is dangerous,” Hernández said, in video of the meeting.

“But we’re journalists!” one person can be heard responding.

Esponosa said the mayor’s response was “absurd” but typical of the way Mexican officials often imply that victims like Vásquez are culpable in their own deaths. “It criminalizes him and makes him responsible for security conditions that are not the responsibility of a citizen, much less a journalist,” she said.

Journalists covering protests have also come under attack in Mexico.

On the same day Vázquez was murdered, four journalists were injured, when police in the city of Cancún opened fire on a crowd protesting against femicides.

Activists called for the march after the murder of a woman named Bianca Alejandrina Lorenza, 20, whose dismembered body was found in a plastic bag at the weekend. When members of the group attempted to storm the local city hall, police opened fire with live ammunition.